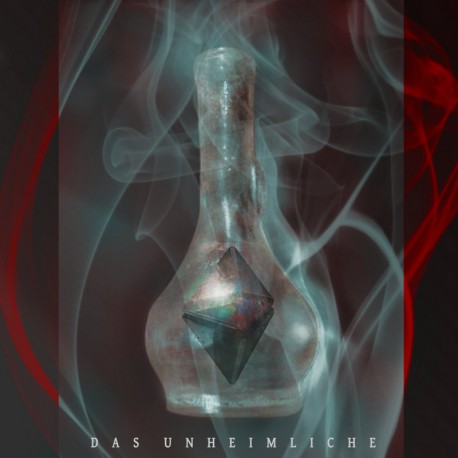 Das Unheimliche, which means the uncanny or eerie, is the first collaborative effort between these two imposing talents. Bathory Legion, who came up with the title, holds this concept to be the natural evolution, the coagulation, of the previous album Drepe, with its esoteric and sinister meaning overcoming the psychological one. Triggered by a recent event experienced, the Roman artist imagined a modified tetrahedron, a “terrible jewel,” as symbol – not of chemistry but of alchemy – fading into beauty. Bathory Legion’s opening track is titled “Lahko” (the Finnish word for “sect” or “cult”) and begins with a voice captured from the Russian radio UVB-76, evolving into a rhythmic avant-garde and experimental ambient adventure.

Hermann Kopp, who has made a significant reputation for his soundtracks to Nekromantik and Der Todesking in the ’80s, bases his “uncanny” track on a movie from 1913, The Student of Prague, in which a demonic figure named Scapinelli makes a young student sell his soul, takes away his reflection in the mirror, and creates a disturbing doppelganger. The track “Scapinelli” contains a quotation from the movie. Regarding Kopp‘s second track, “GAS n.71,” this was part of a series of recordings Hermann realized in 2017, a series which he called GAS. The recording was covered and remixed by Bathory Legion as the second track of the release with an intense pipe organ & drums sound.

Regarding the details of the artwork, Bathory Legion photographed a fairly old bottle in a house of the Apuan Alps, and this fact is full of meaning – which, however, will remain secret – and then created a digital painting of it.

Released by Septenary Arts - a sub-label of The Sinister Flame.