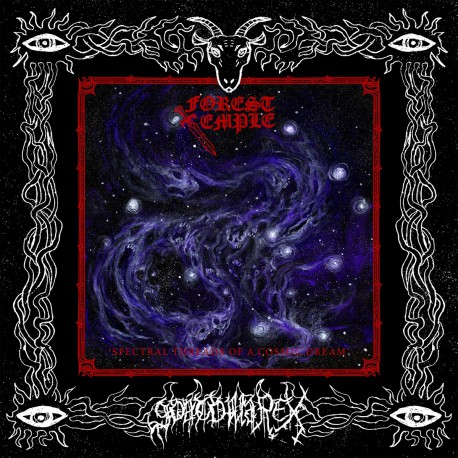 Glittering from the blackest heavens above, eyes of gleaming star shine possessing all that receive it, and haunting hearth and home by astral projection manifestation—descends that shimmering edifice of the Forest Temple. Built brick by brick by the sorcerous configurations of Pontifex Maximus, Lepidus Plague, infamous for his campaigns with Kommodus, began this hermetic quest in the age of 2019; but it would not be until the age of 2020 that the first true incantation would be evoked. This of the cosmos and the celestial leaves of the universal sphere tree, an incantation that is now made flesh by the iron visions of GoatowaRex unicorn revelry, upon the darkest spread of black vinyl wax.

Spectral Threads of a Cosmic Dreams is a crooning fantasy of crepuscular glory, a celebration of those that hide in the black between the stars and make grand lament of universal indifference. A dreamy descent into the depths of dungeon synth, these spectral threads bring the dust of myth to life once again, the frolic of psychedelic reverie made audial, hinting at those creatures which dwell beneath the mud and beneath the mind. A proudly mature, fully realised, and truly unique incantation; those seeking the hypnotic hymns of otherworldly delights and decay to fall upon, need seek for this spiritual succour no longer. The Spectral Threads of a Cosmic Dream soak the stars and make those dreams flesh, both light and dark consummating their creation of child shadow.