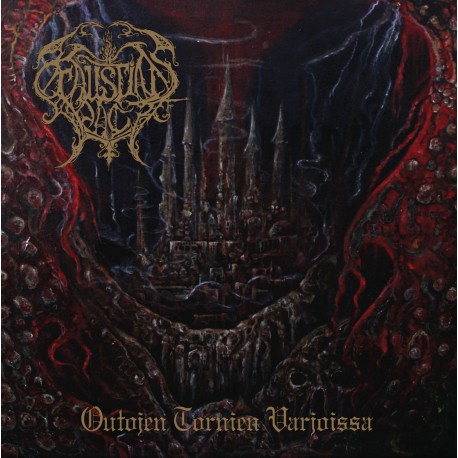 Since 2007, FAUSTIAN PACT have been one of Finnish black metal's best-kept secrets: "those who know, know." Their first three demos, one following the other between 2008-2010, poignantly presented a magickal, folkloric aspect long missing from serious black metal. They were a band out of time, seemingly - "born too late," not fit for these increasingly modern times. Now, nearly a decade after FAUSTIAN PACT's last demo, this trio of sorcerors bring the past into the present with their LONG-awaited debut album.

Titled Outojen Tornien Varjoissa, FAUSTIAN PACT's full-length debut is the grand culmination of all the gloriously bewitching work they brewed across that trio of demos. Exploding with an effervescence that's addicting and undeniable, their swords-aloft attack surges and swells, crests and cascades. At the forefront are stained-glass synths whisked from a time - and a fantastical landscape - far, FAR away, sumptuously underlining their heroic/romantic style of black metal deeply steeped in a nostalgic past. Across the album's 41 minute (fantastical) landscape are spread lyrics of splendorous mythology, swords & sorcery, vast forgotten realms brought to life through wily, wanderlusting black metal betraying a noble melodicism. FAUSTIAN PACT are thus a unique balance of contrasts: orkish energy vs. mystical atmosphere, dungeon rawness vs. castle-top aristocracy, obsidian darkness vs. gleaming light. So, whether 25 years ago or 2500, removed by a reality or two, Outojen Tornien Varjoissa is timeless BLACK METAL MAGICK - dark medieval times have at last arrived!