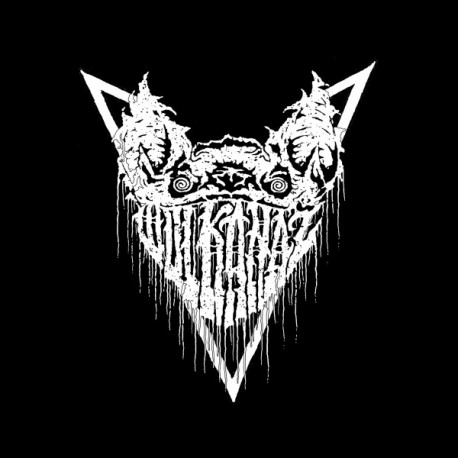 Limited to 333 copies. The first two and fourth records are picture discs, the third record is pressed on black vinyl. The picture discs are housed in foldover jackets. The vinyl record is housed in a standard jacket with a double-sided insert. All are housed together in a box with silver hotfoil printing.

Limited to 333 copies. The first two and fourth records are picture discs, the third record is pressed on black vinyl. The picture discs are housed in foldover jackets. The vinyl record is housed in a standard jacket with a double-sided insert. All are housed together in a box with silver hotfoil printing.

Featuring rare, unreleased, and remastered material spread across three 12” picture LP records and one 12” LP (100 red vinyl only available in the Die Hard version), Guþlekan Krapft is 73 minutes of prime ‘n’ pure WULKANAZ. Included herein are the following recordings: the Wulkana (2011) and Afgrundjaslukin (2012) EPs, both in their entirety on one record; Hatilæsegûn, which includes a song from a split 7” with Skuggehiem, as well as two previously unreleased songs; Guþblostreisinôn (2013), which was previously available only as a cassette, also featuring rare compilation material; Ôganan Maistaz Managizô (2013), also previously available only on cassette; and for the diehard version only, the Hufô and Blodwughe EPs, respectively from 2014 and 2017, together on one record.

Of course, the name WULKANAZ should be well familiar to those who keep their noses in the grime of the black metal underground. For over a decade now, selfsame mainman Wulkanaz – mastermind Wagner Ödegård (aka Kumulonimbus) – has pursued a singular, idiosyncratic vision of black metal across myriad demos, EPs, and splits. WULKANAZ's four albums to date, however, have been become cult classics among the diehards brave enough to behold the mainman's visions, but many find that those visions reached a fever pitch in their short-length form: arguably, the freest ‘n’ foulest distillation of the wild WULKANAZ aesthetic.

And that’s exactly what you’ll find across the vast expanses of this Guþlekan Krapft boxset. A malevolently swirling, frequently bewildering plunge into the depths of madness, each of these vignettes comprises brittle-but-belligerent shards of the uniquely/undoubtedly bent WULKANAZ worldview. Black metal undoubtedly forms the base, but all 73 staggering minutes here exude an acute punkishness in approach, bolstered by eerie folkish melodicism more often than not. With songs stripped down to the barest-of-bones minimalism, delivered in rapid-fire succession, this violently stark schematic nevertheless feels fleshed out and full, each song saying exactly what it needs to and then moves on to the next. As it goes on – or, especially, within the specific confines of each recording – a devilish delirium is invoked in the (un)willing listener, driving them deeper into the wilds of WULKANAZ…

A long strange trip mapped out by the madman who specializes in short excursions into insanity, WULKANAZ’s Guþlekan Krapft might be THE definitive statement of the band. As such, no expense will be spared in ensuring this boxset meets the most luxurious standards.