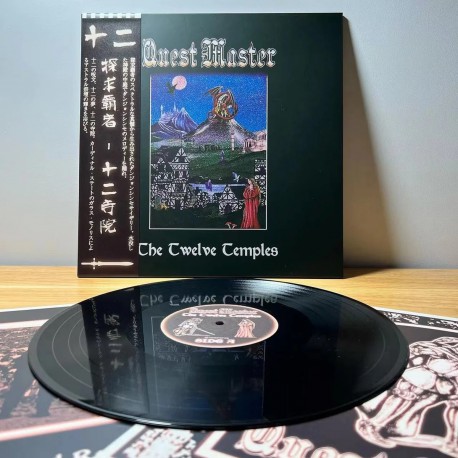 Twelve truths, twelve blessings, and twelve prophecies does whisper the noble wizard Lord Gordith, known more by the grand herald of Quest Master and the dungeon wonder he ensorcells. Unchaining his fantastical melodies from the bejewelled Australian tower dominion of his spirit soil, Quest Master has spent half a decade hypnotising mortals from across the spheres, wielding archaic digital entertainment device instrumentation in adventurous mastery and evocative imaginings. Many moons ago was his prodigal incantation, The Twelve Castles, unchained and revealed to dream path acolytes, a second promised to those with patience, in which, The Twelve Temples, did come upon kaleidoscopic nimbus of eldritch splendour. Thus it would be that this glorious incantation be brought to acolytes by the iron altar power of GoatowaRex ritual worship, this upon raven wax of darkest vinyl.

The Twelve Temples bring twelve dreams by twelve spells. A truly melodic and sonorous dungeon synth experience that harkens back to the final decades of the 20th century, to the electronic realms of archaic computer entertainment and digital adventures, that are now but the nostalgic memories of eldritch acolytes seeking those days of old. Bright passages of shimmering melody, evocative execution of descriptive fantasies, whimsical wanderings of uplifting atmospherics and a truly dedicated thematic of glittering role-playing aesthetic, all aspire to deliver those acolytes seeking the adventures of their youth upon journeys both new and old. A medley of the past by fulcrum of the future. The Twelve Temples do rise from twelve waves of twelve visions—the yearnings of juvenescence satiated by possession of audialmancery.

Available soon upon raven of wax black vinyl. In radiant glow of the submerged temples as sapphire cascades give power to crystal cathedrals.