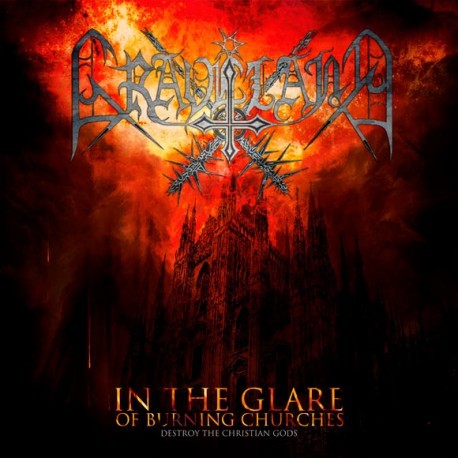 Graveland - In the Glare of Burning Churches Slipcase-CD

In the Glare of Burning Churches is the fifth demo album by the black metal band Graveland. Graveland's style started as raw Black Metal. Lyrically, on the early works Darken was inspired by Celtic beliefs. It was originally released in 1993, on cassette format, on Witching Hour Productions. Many have called this "The most hateful black metal demo of all time!" It was then re-released on No Colours Records in 1996 on CD format, and again on the same label and format in 1999 along with Epilogue. The demo is "inspired by 'Holy War' waged in Norwegian Black Metal underground against Christianity". In the Glare of Burning Churches will have four bonus tracks and remastering, in addition to new graphic design and a 20-page booklet featuring tributes from Nergal (Behemoth) and other black metal musicians. Also included will be previously unreleased photos, O-card slipcase and original black and white 4 panel booklet!!