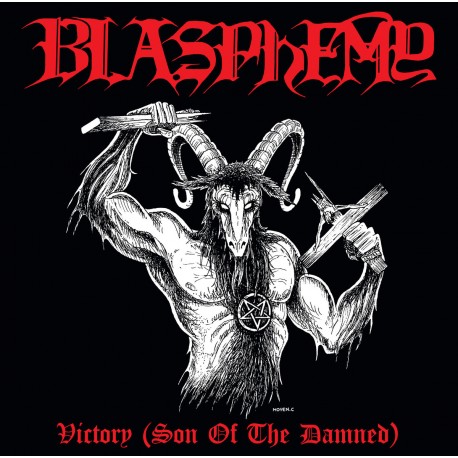 In 2018, it has been approximately eighteen years since Blasphemy returned from a six-year hiatus to perform two series of live rituals – first, in July and August of 2000 and again the following summer. Although it was not known at the time, these gigs proved to be significant in the fact that they would be the last for another eight years. One of these historic shows, on July 13, 2001, was attended and recorded by YK Insulter, and this recording was later released that same year on his fledgling label, Nuclear War Now! Productions, under the title “Live Ritual – Friday the 13th.” A limited die-hard edition was pressed on red vinyl and also included, most notably, a CDR of a rehearsal that the band performed about one month later in preparation for their gig at the Anza Club in Vancouver on August 29th. After having recorded the “Live Ritual” performance in July, YK shipped the very same MiniDisc recorder used for that event to Ryan Förster (aka DeathLord of Abomination & War Apocalypse), along with instructions on how to use it. The aforementioned rehearsal session took place in the basement of then-bassist Bestial Saviour of the Undead Legions, and Förster captured the event by placing the MiniDisc recorder on the top of a washing machine in the room. Given the circumstances, one might erroneously assume the resulting audio quality to be inferior. On the contrary, the audio turned out to be compellingly good and thus worthy of its own release. Each instrument, including the vocals, is clearly and distinctly audible and appropriately mixed with respect to the others. Nuclear War Now! is thus proud to present this rehearsal recording for the first time as a standalone edition on double-LP, CD, and cassette formats. What makes this release particularly unique is the first-time inclusion of the track “Victory (Son of the Damned),” from which the rehearsal now derives its name. In fact, the track is included in two consecutive iterations, as it was played back-to-back during the session in preparation for the song’s live debut at the following Anza Club gig. Another feature of this recording that makes it covetable is the between-song banter among the band and guests alike, including members of Black Witchery, who attended the rehearsal. Given the length of the session, the newly-mastered audio of the vinyl version comprises the first three sides of the DLP, and the fourth boasts a blasphemous etching. Though debate continues to this day as to which – between “Fallen Angel of Doom….” and the “Blood Upon the Altar” demo – represents the most essential Blasphemy recording, “Victory (Son of the Damned)” promises to hold its own place atop the mantle of bestial black metal history as a snapshot in time of the world’s most notorious black metal band.