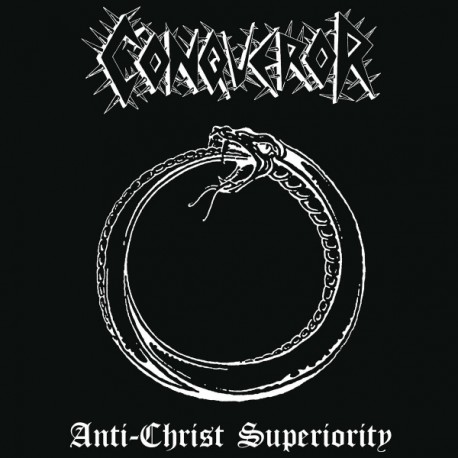 At the time of Conqueror’s formation in 1996, the duo of R. Forster and J. Read were unknown. Forster had a project called Domini Inferi with drummer Sven Cannon that released one demo in 1994, and Read was playing murky grinding death metal in Cremation. But the combination of Forster’s merciless riffs and the explosive fury of Read’s drumming produced something novel. When it was first released in 1996, Conqueror’s “Antichrist Superiority” demo presented a distinctive interpretation of Black Metal. Combining the martial superiority of Order From Chaos with the bestial Satanic ferocity of Blasphemy, Conqueror created a new breed of black metal, reflecting the next stage of its evolution and exposing new strata of extremity within the genre.